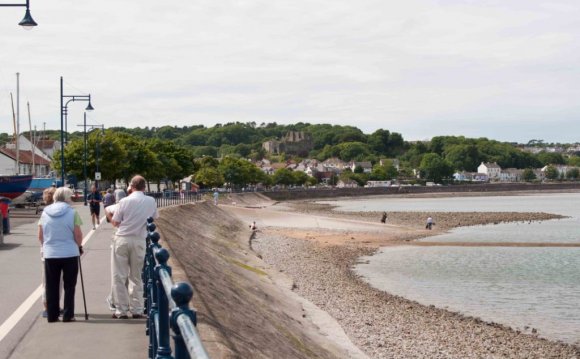 Photos of all the local beaches from Poppit Sands 23 miles to the south and as far as Llanrhystud, 15 miles to the north- including two beaches that can only be accessed by footpath. Click on the photo for more information.

Just a few miles north of New Quay is an attractive Georgian town planned by Alban Thomas Jones Gwynne by Act of Parliament in 1807.During the ensuing decades, the town as we know it today took shape around the harbour and what was once a small fishing village gradually grew into one of the major trading ports along the Cardigan Bay coast.

The structure of the town, earned the town the reputation of being "one of the best examples of a planned township of small scale in Wales". Many of the houses surrounding the harbour were owned by the local sea-captains and many are named after those far flung destinations.

Llanerchaeron is a small 18th century National Trust Welsh gentry estate which has survived virtually unaltered. The house was built by John Nash in 1795. Consisting of the house, servant's quarters, stables, farm buildings and walled garden, The estate has remained in the same family for ten generations. Click on the photo for more information. Open to the public and just a short drive from New Quay (8.3 miles).

Just eight miles to the south of New Quay, Llangrannog is a picturesque and unspoilt holiday resort with a well protected beach, cafes, pubs and a cluster of seaside cottages facing Cardigan Bay. Click on the photo for more information.

Cenarth is a charming little community straddling the river Teifi between Cardigan and Newcastle Emlyn. Here, the River Teifi has made its way through the hard rocks to produce a spectacular series of waterfalls. There has been a Mill at Cenarth at least since the 13th century when Cenarth Mill came into the possession of Edward I when he became Lord of the Manor of Cenarth. Click on the photo for more information.

Tregaron Bog is one of the few remaining examples of a raised peat bog in Britain. Lying beside the river Teifi just above the small market town of Tregaron on the edge of the Cambrian Mountains, there is now an excellent walk through the heart of the Bog on a timber decked walkway. Click on the photo for more information.

St Dogmaels lies on the southern bank of the estuary of the river Teifi, just down river from Cardigan. The village is built around the remains of a twelfth century abbey and has one of Wales' very few working water powered mills.

Just down the road, where the Teifi enters the Irish sea is the expanse of Poppit Sands, where there is also a cafe and a lifeboat station. New page coming soon.

Devil's Bridge is named after a local legend from medieval times. The first bridge was built in the 11th century and the 2 more modern bridges built above it. There is a pay turnstile to view the bridges and the river gorge below it, and another on the other side of the road to walk the trail down the valley and back to view the falls.

The long trail is quite strenuous and not suitable for those who don't like long steep tracks. The scenery around Devil's Bridge is quite spectacular and the mountains in this area were the location of an important lead and silver mining operation in the 18th and 19th centuries.