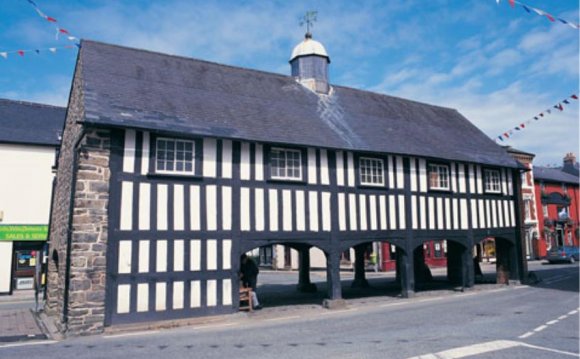 Llandrindod Wells is Wales' most central town. Known locally as "Llandod" it was developed as a spa town in the 19th century, and then benefited from a further boom in the late 20th century as a centre of local government.

The "healing qualities" of the local spring waters attracted visitors to the area during the mid 18th century. As a result the town enjoyed an economic boom and a number of hotels were built. During the "season" between May and mid-September, visitors to Llandrindod would take the waters at the pump rooms at the Rock Park and Pump House Hotel entertained by orchestras, and in its heyday the resort enjoyed a vast array of activities ranging from golf to horse racing!

Most of the towns architecture dates from the boom periods of the Victorian and Edwardian eras when ornate hotels and shops were built including the Albert Hall theatre. There are also buildings in the Art Deco style including two striking former garages.

The two World Wars of the early 20th century saw visitors of a very different kind descending on Llandrindod, when soldiers on training courses were billeted in hotels and boarding houses, and refugees and wounded soldiers were accommodated in the town.

During the 1970s the mid wales area became popular with hippies and those seeking out an alternative, artisan lifestyle. Many of these settled permanently in the region, and in Llandrindod one of the first whole food shops and cafes in Wales was established, and is still going strong today.

The historic Rock Park in the town and its man-made lake remain popular places to visit. In the centre of this lake, used for fishing and model boating, is a striking sculpture of a water serpent and leaping carp. The scales for these sculptures are made of thousands of copper plates initialled by local people and visitors during construction of the work.

Today Llandrindod is a busy market town, holding an open-air market once a week on a Friday, and being in a central location is a thriving conference and business meeting destination. Indeed, following devolution in Wales, Llandrindod has developed a reputation for being the place where important decisions are made by political parties.

The town boasts an international standard outdoor bowling green dating from 1912 which regularly hosts national and international events, along with a newer indoor bowling centre. Llandrindod hosts the Heart of Wales Walking Festival annually, the Victorian Festival at the end of August, and is a regular venue for the start/finish of many national car, bike and motor cycle rallies.

Call for more emphasis on the arts in Wales

Could crowd-funding rescue the arts in Wales?