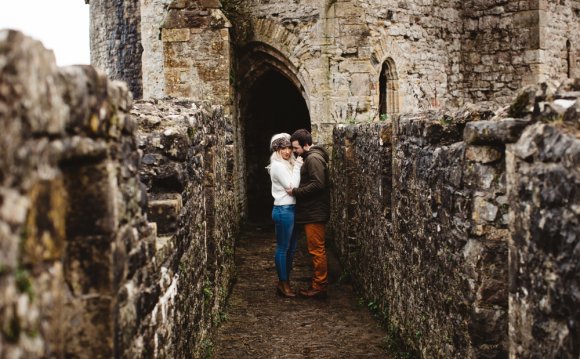 With a week to explore some of Wales, I decided to go off the usual tourist route to the North and explore the South of Wales, with a focus on small towns, seaside villages, and of course castles (you can’t come to Wales and not call by a castle a day, it’s entirely not possible!)

I decided not to build any expectations and keep my prior research to a bare minimum, with nothing but a list of recommended stops along the way as I criss-crossed through valleys, national parks, coastal routes and always winding up and down narrow roads that I was sometimes almost sure would swallow me whole they were so slim!

On the first day my pre-planned navigation system on my phone (aka Google Maps) was set to take me just across the border from England to Tintern Abbey (picture below), and from there I planned to tap into some wifi to type in the next destination and be on my merry way.

Just one problem: wifi isn’t quite as openly accessible in Wales and I would have to instead rely on the directions given to me by the groundsman of the Abbey, who merely offered “keep driving ’til ye reach a set o’ lights, go left, keep driving, ye’ll see a castle and then ye’ll turn around on ye’self and ye’ll be there”.

Okay, I thought to myself. I can do this. And whats the worst that could happen? I’d wind up lost in a country where English is the predominant language and everyone seems nice enough, that I’d just stop again and ask for more directions. “I’ve got this” I told myself. Its about the journey, in the end.

I arrived at a road diversion some moments later, a mere ten minutes after I had left the Abbey in the direction the man had pointed. I quickly suppressed any feelings of feeling overwhelmed or concerned where I might end up, and carried on in the direction he had described nonetheless.

Alas, I made it to the castle. Which also had no wifi. Which also meant more hand written directions led predominantly by finger pointing and a reassuring smile from the two ladies at the welcome desk who convinced me I would find my way one way or another.

Nearly an hour and many wrong turns later, I found myself at the small town of Abergavenny. It was here where I finally found my first wifi connection for the day at a small cafe that sold a variety of cakes in only the largest and most generous slices I had ever seen, and thankfully served real coffee, and by real I mean it was by Melbourne standards, a good coffee.

After sitting for an hour getting to know the owner and his subsequent offerings for “coffee on the house”, I realised this was perhaps what Wales would come to be to me. It wouldn’t be about ticking sights and attractions off a list, but about the journey itself. It would be about the friendly faces who saw the genuine confusion in my face when I gazed at my handful of coins wondering which one was which, about the people who willingly offered a hand-drawn map on the back of a napkin to point me in the right direction, and about the people who welcomed me into their castle hotel like I was of royal significance myself.